“Welcome to my Home”
An interview with a Shan Buddhist Woman 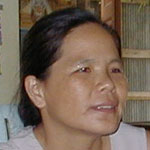 This is the second interview in a village, just South of Mae Hong Son (MHS). While we were talking briefly to a family that used to run a restaurant a neighbor, Nomgsi, invited us into her home.

Nomgsi’s home was one of the nicer homes in Pang Mu, though most of the homes were more substantial than many huts. We noticed pictures in frames above her television. (Our translator said that it is a display of wealth to have pictures like the ones she had.)

JONATHAN: What are the pictures on the wall?

NOMGSI: They are of my son and my daughter. My daughter is a nurse and my son works for the post office. My son is 27 and studied in Chiang Mai and my daughter studied at [?]. I hire workers in my rice field since it is too hard for me. My husband is a hired hand in the village. I only have a little space for the rice field; not everyone has room.

JONATHAN: Does this situation cause problems with others?

NOMGSI: My parents had 20 rice fields, and they divided them between the five of us children. I will have to divide mine up between my two kids. I want my children to do different work because there is not enough room to work with rice.

JONATHAN: Did your son serve at the temple?

NOMGSI: Yes, when he was 12 years old he served at the temple as a novice. [<boy sang long>] This time helped to teach him the scriptures and religion. They must all do it; it gives them status. It helps children become good. They teach them the rules [she listed some of the five rules of the common Buddhist: don’t lie, steal, drink, murder, or be immoral.] to make them better people when they grow older. It makes merit for the father and mother and so they do not go to hell.

JONATHAN: Can you explain what you mean by “hell”?

NOMGSI: There are three worlds: heaven, the world of man, and hell.

JONATHAN: Is there a difference between Heaven and Nirvana?

JONATHAN: As Christians we believe that Jesus is the way to heaven and that we don’t have to earn merit to get there.

NOMGSI: Yes, it’s the same for both.

[She offered us water and jackfruit on her coffee table. Noticing the dried flower arrangement on a string above the entrance we asked more questions.]

JONATHAN: What is that thing over the door; is it special or common?

NOMGSI: We make them in April and May, just before the rainy season; it’s also the same time of year when boys go to the temple to be novices.

JONATHAN: What is it for?

NOMGSI: To keep anything bad and not good out of the house.

JONATHAN: How can evil spirits affect you?

NOMGSI: They can make you not well.

JONATHAN: Is there anything you can do against the evil spirits?

NOMGSI: Many things. Its scary: the evil spirits. There used to be more than now. Because it is more developed. All sorts of things are better now. The people are fewer that used to do evil things.

JONATHAN: Could they communicate to evil spirits?

JONATHAN: What about good spirits?

NOMGSI: There are spirits everywhere. (She pointed out the bowls of rice all around the living room, near the door and on the shelves, and noted that she also had the rice upstairs to keep away the evil spirits). There is a spirit doctor here that speaks to evil and good spirits. He has more good merit than most people and that is why he can speak to them. They have special gifts: their hair smells good, a lot of good karma. Boy or girl, it doesn’t matter.

JONATHAN: Do all of these specially gifted people have to become spirit doctors?

NOMGSI: They don’t always, but if you have all the signs you can if you want to.
Do Christians believe in evil spirits?

JONATHAN: Yes, but God has more power than any evil spirits. We believe that the evil spirits are not humans who have died, but angels that were created by God and sinned. When humans die they either go to heaven or hell depending on whether they believed in Jesus or not.

NOMGSI: No, spirits are our ancestors.

JONATHAN: Do you know where the world came from?

NOMGSI: Most things have come [up?] from the Kingdom of Spirits. (This is a common Shan understanding).

JONATHAN: But how can that be if they had to live here first as humans, your ancestors?

NOMGSI: It (life or reality) is a circle.

[Our interview than came to and end, and we thanked Nomgsi for her time.]